LAMBDA-X is a Belgium company created in 1996, which designs, develops and manufactures optical & metrology systems as well as subsystems for Ophthalmology, Space, Defense & Industry.

Today recognized as a key player in the space sector, LAMBDA-X have developed and manufactured more than 30 instruments which have been deployed in Space since 1996. These instruments are based on a broad range of optical technologies including: light scattering, interferometry, tomography, microscopy, hyperspectral applications, and many more…

LAMBDA-X has selected DELTATEC as an electronic design partner in the scope of an ESA GSTP. (General Support Technology Programme)

In this GSTP LAMBDA-X had to deliver a high speed video recording equipment to the ESA.

This recorder had to support multiples high resolution (2K) and high speed cameras (1000fps) and store a huge amount of continuous shooting on all cameras in parallel.

Pre-studies have shown that the very high throughput combined with the very high storage capacity could only be achieved using multiple SSDs of high capacities in parallel. The only way to control these high requirements along with mechanical constraints for aerospace electronics was to use custom hardware that directly interface the cameras and disks, instead of using COTS CPU platforms. 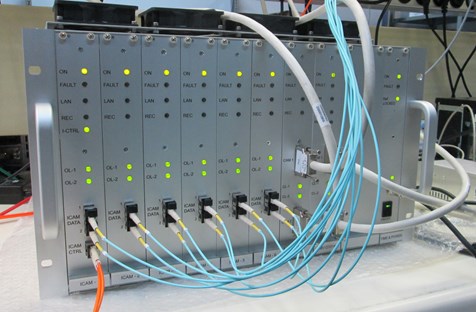 DELTATEC was responsible for the hardware and software design of the recording systems. A remote API was provided to LAMBDA-X so that they can control the system and retrieve video frames in the integration with other equipments in the scope of the GSTP.

The project specifications where really challenging.

The recording systems had to interface with multiple high speed cameras. The most advanced one (2K, 1000fps) output its data on 12x 6Gbit optical interfaces; at a data throughput over 7 GBytes per seconds. Three other cameras (150 to 500fps) where supported through (extended full) Cameralink interface.

The system had to be able to record streams at full frame rate from all cameras in parallel, for a duration of at least 20 minutes. That means a write speed of more than 5 GByte/s with total storage capacity around 6 TeraBytes of data.

Among other requirements: some mechanical constraints for in-flight systems, remote control interface (Ethernet), frame synchronization and time stamping based on IRIG-B signal, etc.

DELTATEC has designed a rack systems composed of 9 boards and a backplane. One board was responsible for overall system control, remote interface and synchronization. The 8 other boards where camera grabbers, with camera interface (optical or CameraLink), FPGA processing unit and storage (SSDs).

Each grabber card was an independent recording system with its CPU and a FPGA to implement the camera interfaces and drive the SSD array.

Total write throughput was achieved using up to 36 SSDs in parallel in the rack. SSD where directly controlled by FPGAs. Operations where controlled by embedded software in CPU module and FPGA. All cards where synchronized through the backplane thanks to the master control card. Recorded data can be retrieved by a Gigabit Ethernet on the back of the rack, using a control API that can run on any remote station. A remote recording and playout GUI was also delivered for system demonstrations. 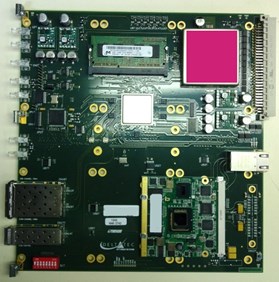 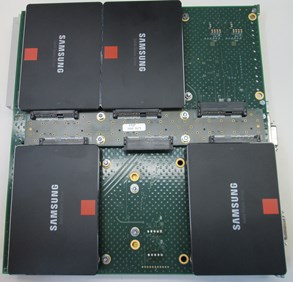